Seoul43 has given me a lot of moments to reflect on the impact of humanity on nature. This, of course, was not my initial intention. I wanted to climb all these mountains as a personal challenge. A city with mountains—how wonderful! I still believe it is one of the reasons that I found Seoul to be a clean city, compared to the other capitals I have been to. Before Korea, I had hiked only one mountain in the Philippines. It was a disastrous and traumatic experience—I nearly fell off of the peak, slipped many times on our descent, and slowed everyone down. I was, in chemistry terms, our group’s limiting reagent. 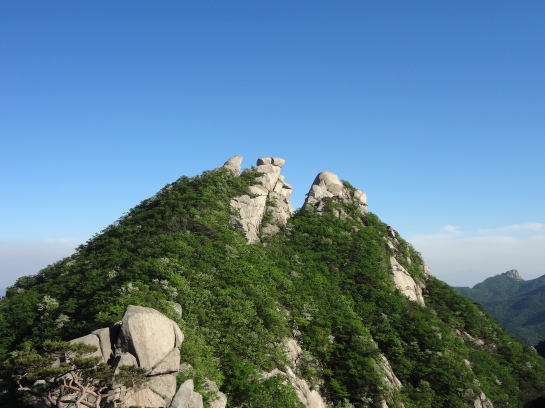 My second intention was to get people to share my experience. This is why I brought the soil from these mountains so that people can plant with them and then bring them back. “Borrowing” instead of “taking” the soil was an important part. It has always been my view that no one is exempt from environmental responsibility, artists/scientists/explorers/designers included. The tasks I asked people to do were also deliberately chosen. I wanted to ensure that this project had some positive environmental and cultural impact.

What I didn’t expect, aside from the extreme fatigue, were my unique experiences for each mountain. Many pushed me to my limits, some nearly killed me, others were places I found so fascinating that I want to revisit them. A number disappointed me for their smallness (This is it? Really?) while others made me ask a lot of questions.

As these are mountains in a bustling capital, one thing I found consistent about them was human activity. If Seoul’s mountains were a system that ensured the coexistence of nature and humanity, then it was determined by these parts:

First, there were the modern city officials, or whoever governing bodies that mandated which trails should be open to the public and what was allowed to be done. They were the ones who permitted the landscaping and gardening of these mountains, who added trails, tennis courts, exercise machines, trail signs, and other things that make them “usable” to the public. 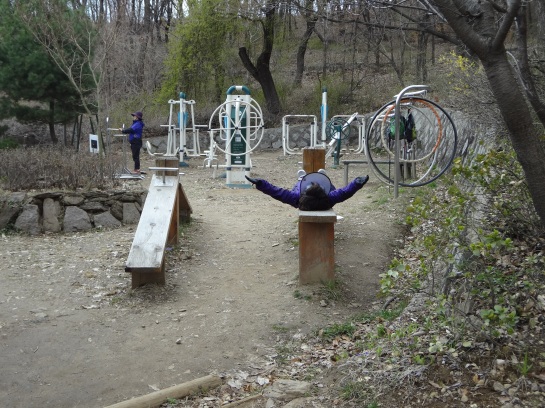 Second, there were the citizens and tourists, both young and old, who use these mountains everyday. Hiking is an everyday activity for many Seoulites. Although I always hiked alone (which was a stupid idea, but I couldn’t find anyone who wanted to come with me), I was never really alone—there were always groups of ajusshi, ajumma, or young people who were also on the trails and giving me a hand. For the smaller mountains that served as neighborhood parks, it was the residents’ way of getting away from urban noise. Indeed, I could not help but think of these mountains as refuge in a city whose aging population is affected greatly by Korea’s rapid change. 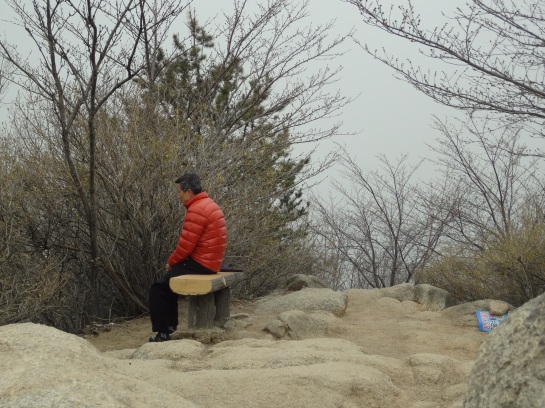 Finally, and no less importantly, are the people from Seoul’s past—the historical figures who added fortresses, cemeteries, and many a Buddhist temple to these mountains, turning them into rich canvasses that illustrate a city’s past and provide interesting questions as to how they fit into contemporary culture.

The historical and cultural value that these manmade structures add undoubtedly “elevates” the status of a  mountain to something more than just a park. The exercise machines and other sports amenities added in recent years add utilitarian value for the citizens who make physical fitness a priority. These make me pause to think, because as a naturalist, one would balk at mankind altering nature, and yet, adding something of historical and utilitarian value perhaps encourages the city to preserve it better.

Because Korea is a very mountainous country and one that rapidly urbanized, I observed that: 1) Many mountains that used to be bigger have been “broken” into smaller ones because of apartment buildings, schools, etc. that found their homes in the lower areas, and 2) Some mountains seem to have all but disappeared because the buildings were right on top of them. Is it alright to do this to make room for city dwellers and businesses, as the country has so many? Indeed, as the official list I obtained from Korea’s Forest Service dates back to 2006-2007, I think that 43 will not be the number once they review the list once more. It will be interesting to see how the face of a city changes and how modernization affects these natural structures that are as old as time.

Originally posted on the Seoul43 site.

Good morning from my favorite corner reformer in my favorite Pilates studio! 😍 @m.i.a_studios
#GuerillaRainbow No. 23 on the way to the gallery yesterday, part of 20.6k steps before today's bedridden recovery. ❤🌈
Your girl just got fully Spikevaxxed! The Dolly Parton weekend marathon commences. 😍
Hey, you! I just had a PhD meeting! 😂❤ #BennyTheSeal
I have seen this seal more than many of my humans in lockdown. He kept blinking today and his fur was styled like small fauxhawks ❤.
"Hello, your highness." 👋