When I am working through creative problems, I like going out for walks. This afternoon, I went to Fort Canning Park, intending to visit the National Museum of Singapore. I wanted to say hi to a favorite art piece of mine, Suzann Victor’s “Contours of a Rich Manoeuvre,” an installation of moving chandeliers. Sadly, it was under maintenance, but when I peeked outside the entrance, I saw flying people. Specifically, there were two women swinging on the facade, and another three on a crane.

It’s the French group, Retouramont, practicing for their performance at the Singapore Night Festival. 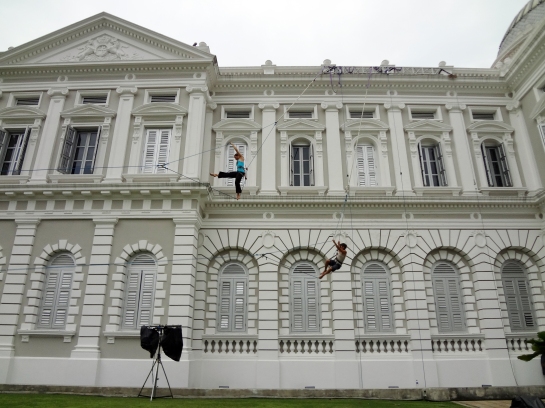 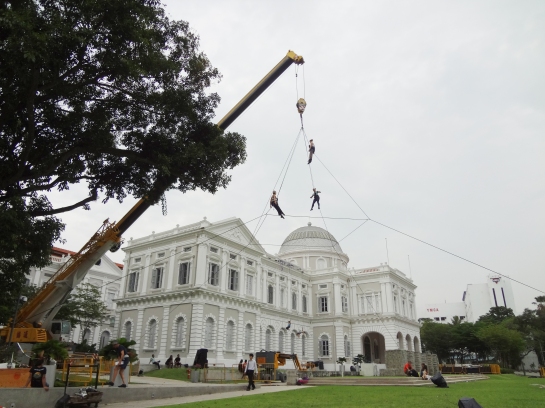 They remind me of Mary Poppins. In a good way. Sychronized sky dancing by real people is definitely better than one done by chandeliers. Thank you, ladies! I needed this today.

The mixing of the traditional with the modern and the foreign have been a consistent source of fascination for me, as a waegukin (foreigner) living in Seoul. And so this official video of an excellently produced version of Les Miserables by the South Korean military hit home (from the official Youtube channel of the Republic of Korea Air Force):

This video is emblematic of my experiences here in taekwondo, which is used in the Korean military. While it is a daily 90-120 minute class of grueling militaristic training, there are some exercises that initially seemed to be a peculiar amalgam of tradition and Westernization.

In my class here (dojang #14 and masters #29 and #30), the language barrier is higher than the Namsan Tower, leading me and my teachers to communicate via our smartphones. They are quite patient with the first foreigner they have ever had in class (and for many, in their lives). While I’ve trained in other countries before, I have never experienced doing jump rope and taekwon dance until now. Two weeks ago, I remember laughing when the grandmaster mentioned Gangnam Style, without realizing he actually meant for us to dance it.

I thought he was kidding. He was not.

I suspect they didn’t think a waegukin will want to do it, but perhaps to their surprise, I did. (Hey, it’s still cardio.) So for the past few weeks, most of the cognitive load in my class have been devoted to learning how to dance K-pop with taekwondo moves, and learning how to jump rope to the beat of Gangnam Style and its parodies. It is quite a huge change from the traditional military-style training I’ve been exposed to. Instead of thinking it ridiculous, I actually feel that it contributes a lot to coordination and rhythm. And it shows. I see these nine-year-olds to be so disciplined, with side kicks past the level of their faces. They even gave me my own jump rope, which I need to practice with by myself as this is something I haven’t done since I was a little kid.

Here is a video of taekwon dance by Youtube user cOOlfren77:

A more extreme version of taekwondo jump rope is here in this video from Korea’s Got Talent by Youtube user taekwonropegirl:

Needless to say, I am absolutely transfixed at a rigid Confucian society making way for jaw-dropping creativity such as these. Especially for taekwondo, I like to imagine that such rigidity might have caused someone to snap and just do it to K-pop. Great fun.

This week, I had the pleasure of interviewing Elizabeth Streb, extreme action choreographer, for a series of articles I am writing about how drawing figures in a creative person’s process.

After reading her interview in The 99 Percent, where she said that drawing was the first thing she did when she had a new idea, I knew I had to meet her. Her drawings show how something monumental started with a series of lines and shapes.

Interestingly, her work invokes involuntary memory as well. In her talk in CUNY, someone in the audience asked about her definition of a true movement.

“A real move has to do with being itself…. It’s telling its own physical story, and maybe it would remind you of your mother’s perfume, maybe these memories are embedded in ourselves and it happened to you going down a hill or bumping into a tree with your sled. And what I’m trying to do is usurp those memories that are primarily physical and not tabulated because there’s no real nomenclature for it.”

I was also thrilled that she knew Lisa Randall, a physicist whose work I’m a big fan of, and it made me think how amazing it is that all these wonderful things are connected in some way.

Article/s to follow, but I was so moved by the interview that I decided to draw. She is one classy lady and a true artist. Thank you, Elizabeth, for such a lovely, gracious interview.

Hello! This is the website of Catherine Sarah Young (楊 佳 仁). I'm an artist-scientist-designer-writer-explorer working on human perception and the environment. I imagine, write, and make things. Check this site for project updates, and the menu for current and past work. Thanks for stopping by!

(4th) This week, I revisit my Climate Change Couture (2013) series to see how these have aged. Let's go: The Trash Dress: Sartorial Chic from Scrap In the future, one will peel open a candy bar and then save the wrapper for a dress. Real fabric has become extremely expensive, and it has become normal for both rich and poor people to use reclaimed materials for clothing. Whether you’re going shopping, to the park, or to a wedding, plastic that once wrapped chocolate can clothe you. But who knew that garbage couture could actually be so chic? — Photos by: Studio Catherine Sarah Young Model: Zoé Bezpalko Shot on location at: Haji Lane and Sifr Aromatics on Arab Street, Singapore Thanks to: Johari Kazura and Hanz Moniefiero Medina . . . Notes: I now have so many products made from plastic bottles and other waste. Before, many upcycled objects had recognizable traces of its former life, such as bags made from recognizable candy bar wrappers. Now there is a proliferation of products made from yarn made from plastic waste. (P.S. My archives still has those candy bar wrappers. 😂) . . . #ApocalypseProject #ClimateChangeCouture #environment #climatechange #sustainability #fashion #artscience #sciart
(3rd) This week, I revisit my Climate Change Couture (2013) series to see how these have aged. Let's go: The Bubble: Your Cocoon from the Elements These days, no one leaves any establishment without wearing The Bubble, a climate controlled personal chamber that assures that climate change will not affect your daily lifestyle. While pumping you with cool filtered oxygen, The Bubble also comes with wireless communications to call your girlfriend and say that you are on your way, sensor capabilities that perceive the conditions of the environment around you, and wifi so you can check your Twitter feed while waiting. The Bubble. Coming soon to a mall near you. — Notes: I haven't seen this one for sale yet, have you? I'm a little relieved we're not there yet, though sometimes I feel like the physical divides were made for ourselves, be it a screen or a gated community or a border wall, are steps closer to this. 😅 — Photos by: Studio Catherine Sarah Young Model: Marcel 명철 Bruelisauer Shot on location at: Singapore-ETH Future Cities Laboratory at Singapore’s CREATE (Centre for Research and Technological Enterprise) Tower. Additional design by: Yuqi Liew #ApocalypseProject #ClimateChangeCouture #environment #climatechange #sustainability #fashion #artscience #sciart #futures #speculativefutures #catherinesarahyoung
(2nd) This week, I revisit my Climate Change Couture (2013) series to see how these have aged. Let's go: . . The Thermoreflector: Your Heat Shield for Urban Exploration . . Ready? Aaannnnddd go. The destination isn’t very far; it’s just on the other end of the street. And so the boss said not to take the motorbike. You step into the soft hot pavement, carefully making sure the contents of the box do not move around so much. But the street is an obstacle course. You see the air conditioning units sticking out of the apartments, each block of plastic hot enough to defrost a steak, and mentally you have a vision of darts coming out of them and targeting you like little snipers. Your dress reduces your discomfort; the sleeves protect your face and the fabric reflects the heat so that you won’t get roasted at the end of your journey. You finish the trip as quick as you can, and finally, you ring the doorbell. You deliver the pizza and leave. Man, you deserve a tip bigger than that. — Photos by: Studio Catherine Sarah Young Model: Cheryl Shot on location: Behind Circular Road, Singapore (the Aircon Road) Thank you to: Marcel Bruelisauer — Notes: I still think something like this is in the future! Let me know if you see this come true. #ApocalypseProject #ClimateChangeCouture #environment #climatechange #sustainability #fashion #artscience #sciart
This week, I revisit my Climate Change Couture (2013) series to see how these have aged. Let's go: The Apocalypse Evacuation Suit . . . Earthquake. The sirens begin to ring, and once more, members of the Climate Change Rescue Squad rush to a nearby coastal area where a tsunami is supposed to hit within the next few hours. They calmly go past the panicked masses running for their lives to higher land with as many possessions as they could carry. Inside the village, the remaining people stumbling against the rubble were the elderly, the disabled, and the small children crying for family members lost in the chaos. To reduce their anxiety and make them more alert to the impending disaster, the rescue team distributes their spare Smell Masks, which filter the oxygen around them while giving them scented air to breathe. The oxygen is scented with lemon, lavender, or peppermint, depending on the victim’s needs. It is just another day. — Photos by: Studio Catherine Sarah Young Model: Dr. Matthias Berger Shot on location at: BubbleZERO Laboratory, Singapore-ETH Centre’s Future Cities Laboratory Thank you to the Low Exergy Module of the Future Cities Laboratory, Dr. Matthias Mast _ Notes: I've had to use iterations of this mask in some of my succeeding art residencies. I also still wear this suit for workshops and talks (so practical!). As for the scent, the company AusAir sells high-end anti-pollution face masks with filters infused with scents such as eucalyptus and lavender. ¯\_(ツ)_/¯ . . . #ApocalypseProject #ClimateChangeCouture #climatechange #fashion #sustainability #art #artscience
A brief trip to the islands to check on my folks and pack up the rest of my stuff, but to make this productive I'm also a fellow for this cool research residency, ColLaboratoire, an international initiative by University of the Philippines Open University, University of Plymouth, CogNovo Foundation for Cognitive Innovation, and others. I'm in the "Reimagining Sustainability" module. I think a sustainable planet has arts and culture embedded in it, don't you? 😊Can't wait to visit Siargao, Conde Nast's Best Island in the World, a title I wish it didn't have as it's probably best to go now while gentrification and mass tourism hover like dementors. 😝 I worked with some of these people more than ten years ago, heyyy. See you soon, nerds. 😉 #ColLaboratoire2020 https://collaboratoire20.cognovo.org