In the middle of art/science projects, I do say yes to doing graphic design, especially for awesome people. Creatively speaking, it’s a good break from the grind and practically speaking, it’s good to know that I can still do things like logos.

So this is a logo design project for a shop called La Monja Loca.

So. La Monja Loca. The brief given to me by Ria, the project manager / producer, was to generate an iconic crazy nun with one eye that was a cross between Clockwork Orange and Twiggy’s spiky eyelashes. In the beginning, I sketched out variations of eyes.

Version #9 was chosen. I also did some research on the wimples that Carlos wanted. These are called “cornettes.” (Hey, I didn’t know that! Now I do.)

The fourth one was the one they picked. I tried sketching out three different poses. First was one facing right (viewer’s angle). It was a bit too Clockwork Orange. 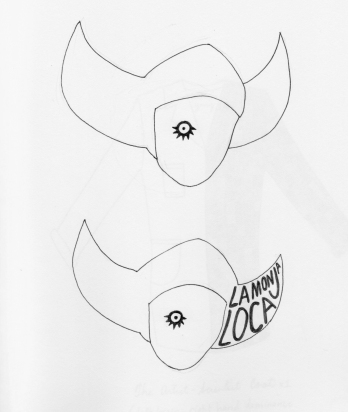 I sketched another version facing left. 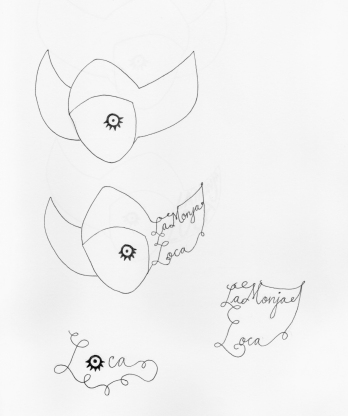 Finally, I sketched a frontal symmetrical version, which was ultimately chosen. I like that version best, too.

They also liked the script lettering from the second version. It fits because a lot of script calligraphy fonts recall the late eighteenth century and early nineteenth century, which is the time period that the store evokes.

To make sure things are symmetrical, I sketched the nun on graph paper. I always feel more connected with my work when I first draw them.

Afterwards, Carlos wanted the wingtips flattened so as not to resemble horns. He also took out the bib. I gave him a number of time-appropriate script fonts to choose from and he chose Flemish Script.  I then worked to make the resulting logo a bit older, “inkier” and less sharp to match the period. Carlos, Ria, and Tesa Celdran offered feedback last weekend. And voila, here we go:

Next time you’re passing through the Walled City of Manila, do check out the store! It’s located at the Plaza San Luis, Calle Real, Intramuros, Manila. Follow the store’s Tumblr here.

This project made me think of all the logos I’ve ever made. Check them out here. *tears*

Ok, now back to my regular sketching and prototyping and making grind.

Revisiting my residency project at the National Art Studio of Korea as one of their artists-in-residence in 2013: Seoul43, an interactive installation with soil I collected from hiking all 43 mountains of Seoul. Viewers were invited to plant with endemic flora and return the soil with the plant back to the mountains to share my experience. I think about this in my PhD research here in Sydney where I am investigating the Critical Zones, and look back on when I mixed samples from the CZs like bibimbap. I nearly died on two of these mountains and was saved by Buddha once, what fun times for my first residency. ❤ Visit the project at www.seoul43.wordpress.com.
I had a lot of fun speaking to Jo of Occupational Hazards, a podcast with folks about career journeys, to talk about how I ended up doing art/science work about climate change. We talked about career pivots, my art projects, sustainability, leadership, and martial arts.
Hearts, strike a pose! Thanks @gabriel_undery!
Congrats, everyone! Woohoo! 👏👏👏
First night off from PhD writing and I feel like I'm in the Bay Area with these hills plus the quantum physics lecture and our Antarctica epiphany. 🤣 Oh, and legit French crepes and cider! Oh, and Promising Young Woman at the Ritz! ❤ Now to write 10K more words...
Today a communications call with #TeamHB6 as we begin to plan our #Antarctica journey. Great to see you all from all over the world!