What the clouds can teach you about imagination and everyday things 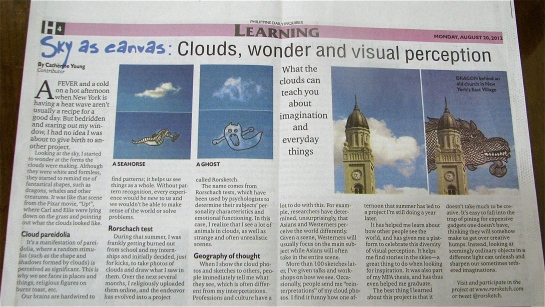 A fever, a cold, and a hot afternoon on a New York heat wave aren’t usually a recipe for a good day. But bedridden and staring out my window, I had no idea I was about to give birth to another project.

Looking at the sky, I started to wonder at the forms the clouds were making. Although they were white and formless, they started to remind me of the fantastical shapes, such as dragons, whales, and other creatures. It’s not unlike that scene from the Pixar movie, Up!, where Carl and Ellie were lying down on the grass and pointing out what the clouds looked like.

It’s a manifestation of pareidolia, where a random stimulus (such as the shape and shadows formed by clouds) is perceived as significant. This is why we see faces in places and things, religious figures on burnt toast, etc. Our brains are hardwired to find patterns; it helps us see things as a whole. Without pattern recognition, every experience would be new to us and we wouldn’t be able to make sense of the world or solve problems.

During that summer, I was frankly getting burned out from school and my internships, and initially decided, just for kicks, to take photos of clouds and draw what I saw in them. Over the next several months, I religiously uploaded them online, and the endeavor has evolved into a project called Rorsketch. The name itself comes from Rorschach tests, which have been used by psychologists to determine their subjects’ personality characteristics and emotional functioning. In this case, I realize that I see a lot of animals in clouds, as well as strange and often unrealistic scenes.

When I show the cloud photos and sketches to others, people immediately tell me what they see, which is often different from my interpretations. Professions and culture have a lot to do with this. For example, researchers have determined, unsurprisingly, that Asians and Westerners perceive the world differently. Given a scene, Westerners will usually focus on the main subject while Asians will often take the entire scene in.

More than 100 sketches later, I’ve given talks and workshops on how we see. Occasionally, people send me “re-interpretations” of my cloud photos. I find it funny how one afternoon that summer has led to a project I’m still doing a year later. It has helped me learn about how other people see the world, and has given me a platform to celebrate this diversity of visual perception. It helps me find stories in the skies—a great thing to do when looking for inspiration. It was also part of my MFA thesis, and has thus even helped me graduate.

Wonder in the everyday

The best thing I learned about this project is that it doesn’t take much to be creative. It’s easy to fall into the trap of pining for expensive gadgets one doesn’t have, thinking they will somehow make us get over creative humps. Instead, looking at seemingly ordinary objects in a different light can unleash and sharpen our sometimes tethered imaginations.

Visit and participate in the project at http://www.rorsketch.com or tweet @rorsketch.

This article first appeared in the Philippine Daily Inquirer’s Learning section, 20 August 2012, page H4. With thanks to my editor! Full text in their digital edition here.