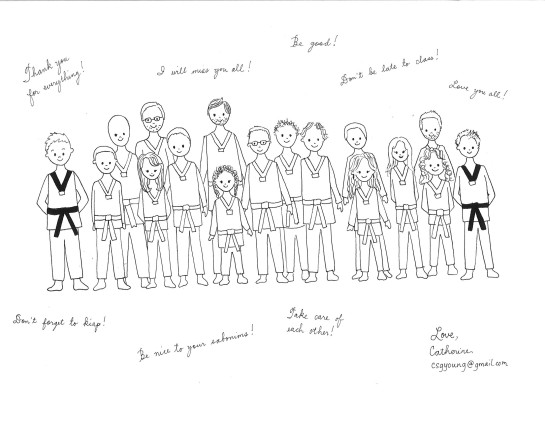 A farewell illustration I made for my taekwondo school, because I’m a sentimental crybaby.

Three days away from New York. I need to kick something.

Rewind to last Friday. I always spend part of my last day in a country in my taekwondo school. Call me strange, but for me having the final words from my masters is almost like being blessed by Buddha.*

*Sort of. Give me a break; it’s hard to keep moving.

Taekwondo is the bedrock of all my beliefs, perhaps even beyond art, science, writing, and design. It is the one thing that has remained consistent in all the years of traveling and starting over, and as such, is the one thing that has never failed to give me a sense of stability and groundedness. It has been a way not to just let off steam and counter depression, but also to channel all my energy into something that is positive. It will always be my second home.

It is the closest thing I have to a religion. I could probably do without drawing, writing, or tinkering around for a few days, but I go stir-crazy if I can’t train. I’ve trained everywhere—old buildings, white sand beaches, the streets. Even in graduate school, I missed out on most of the design talks because I would always be in the dojang every night. (Was that a confession? Oops.)

It’s an addiction whose seed was planted early. I started doing this when I was thirteen, but I only took it really seriously in the past eight years when I started moving a lot. I got my black belt after fifteen years—quite a while, but starting anew is a side effect of a nomadic lifestyle. The fact that I do this has always surprised people; surely someone who hugs and squeals as much as I do couldn’t possibly be doing something so…tough. I suppose it’s what has given me the confidence to be as open and happy; it’s quite comforting to know that I can take care of myself in potentially dangerous situations. Or at the very least, I know I won’t die without putting up a fight.

Martial arts has always mirrored my life, including all the professions I’ve ever touched. Consider design. Long before designers came up with things like “gamification” or ways of incentivizing and motivating people, martial arts have always used a belt system to “promote” you from one level to the next. Everything from the uniforms, to how the belt is tied, to structure and hierarchy, is designed, way before we ever earned badges or became mayor of something.

Training in Asia, Europe, and America has given me some insights on how differently people see martial arts, and by extension, their personal worldview. Students in Asia are always the youngest I encounter; it’s something ingrained in them (us) from very early on. In Barcelona, it was a mix of young athletes who are set on competing, as well as older ones who’ve done it for years but just want to keep training for the love of it. In New York, it’s always the most eclectic bunch, which is probably why I learn so much about life from watching students progress.

For the most part, I find people who either want to try something new or do what I have come to define as “escapist training” – they want to transcend the usual daily grind. Occasionally, I encounter those who find their careers unsatisfactory, or have rocky relationships that they want to think about. They find the urge to kick the crap out of something to let out the frustrations of the day. I kind of like this application of martial arts; while we can’t actually go to war (unless you’re in the military or security or related professions), we can at least use it to fight our personal battles.

At its core, martial arts have little to do with the BS of the world. You either do the kick or you don’t. I see it as a method of reflection or problem solving— all the questions in your mind can be translated into movement, similar to how I’ve felt in dance. I’ve come to appreciate how it turns into a thermometer of a sort; how I feel during the day becomes so obvious and manifest by how well or poorly I train.

It’s so incredibly beautiful the way I’ve seen people who are not competitive athletes apply this in their lives. I’ve observed kids who were bullied become more confident and sure of themselves, and adults who have made serious life decisions because of what they’ve realized through the sport.

Once, I encountered a pint-sized five-year-old who greeted me at the door after a belt test, jumping up and down and proudly holding the pieces of a board he just broke. And I wonder, what if all kids could do that and grow up believing they can do anything, that everything can be as simple as breaking a board with your foot?

Once, I helped teach a woman who sobbed every time I touched her wrist when teaching her self-defense. She told me that she once came from an abusive marriage, and all the grabbing reminded her of those awful times. Another woman came to me and said that because of training, she felt like wakes up with a lot more purpose. Always when I hear these stories, I’ve thought that some of the techniques should be a requirement for everyone, no matter what age you are.

Perhaps on a more sheepish note, most of my masters have been my therapists of a sort. I am almost embarrassed, but not quite, to say that I have cried on the shoulders of a lot of black belts over the years (because, you know, they have no choice but to listen), and now that I actually am one, it’s a testament to how titles really don’t matter. I suppose I have traumatized many a stoic traditional instructor (who I bet was laughing hysterically inside) who have had to put up with me over the years.

Some things I’ve learned so far

The belt doesn’t matter. Seriously. I see blue belts kicking the butts of black belts all the time. (From what I’ve observed, blue—the fifth color in most belt systems—is the time when I see people getting good. They’re now familiar with the foreign terms and have gotten used to testing and are committed to getting their black belts.) It’s kind of how it doesn’t matter what one’s degree is. The belt is just the thing that holds up your pants. And on that note…

Getting a black belt doesn’t mean much if you get lazy and stop. It’s like getting a degree and then not using it. Don’t get me wrong; It takes years of hard work to earn one, but I’ve always seen it as a lifelong commitment. When I finally “graduated,” I was relieved I didn’t have to start over again when I went to another school, but it wasn’t like the belt gave me superpowers. Training went on; the only difference was that I had to hold the kick pads sometimes. And it’s a lot more embarrassing if you forget things.

How you do taekwondo is how you do everything.