My talks from TEDxNewHaven last year are up online. A big thank you again to Sunnie and Mario and the rest of their team!

TEDxNewHaven, April 2012, The Art and Science of Happiness

2. The Sky as a Canvas for Creativity

3. The Memory of Smell

4. Happiness and the Senses

Past and future talks will be archived on the Talks page from the menu.

Speaking at my first TEDx conference was a challenge. It was not just because it was a great platform for ideas, but because of the timing, design, and execution needed to pull off four interactive talks in one day.

TEDxNewHaven: The Art and Science of Happiness. Photo by Chris Randall

The theme for TEDxNewHaven was The Art and Science of Happiness. My goal for the talks was two-fold: to engage the audience in something interactive in the course of the day, and to enable them to view their senses as tools by which to achieve happiness. To achieve these, I had to produce 200 “sense kits” that contained physical, non-digital formats of my projects: HugPrints, Rorsketch, Smellbound, and EatPoetry. 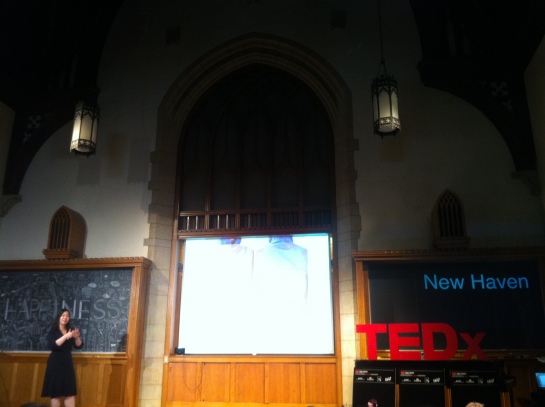 Round One. Photo by Liz Danzico

My first talk was about using our sense of touch. I presented HugPrints, my project where I am attempting to hug everyone in the world and getting visual feedback through a specially designed thermochromic vest. I asked volunteers to come up the stage to hug me.

Hugging on stage. Don’t you just love it? Photo by Chris Randall

Afterwards, I asked the rest of the audience to pull out the HugPrints cards in their sense kits, which contained hugging instructions so they can hug each other (if they wished).

Are you getting enough hugs a day? Photo by Chris Randall

For the second talk, I explained Rorsketch and first engaged the audience in a guessing game of what clouds looked like and then revealed what drawings I made. After doing this project for a while, I wasn’t surprised about how some people were calling out the same things, while other clouds had very different interpretations.

You know what my favorite Pixar movie is! Photo by Ruoxi Yu. 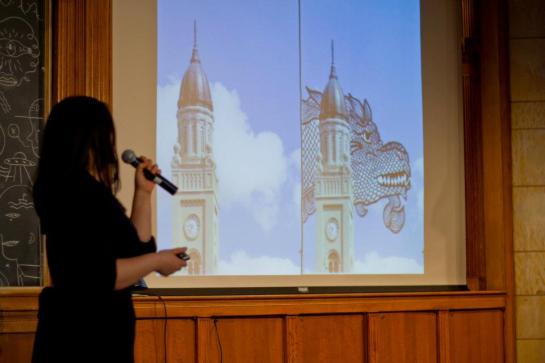 I then asked the audience to pull out the blue Rorsketch cards and the Sharpies in their kits, and they drew their own interpretations on the clouds printed on their cards. To encourage them to draw, I did a live drawing session on a big cloud on stage.

Drawing on a cloud. The cloud I sketched on was taken by Nikki Sylianteng. Photo by Liz Danzico

One of my fellow speakers, Nima Tshering, sent me his cloud drawing. (Thanks, Nima!) 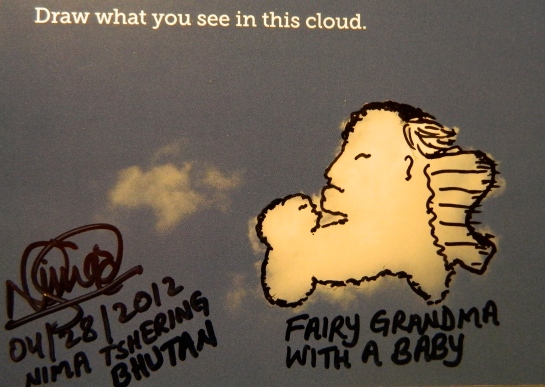 A fairy grandma with a baby by Nima Tshering

I explained two projects for this post-lunch session: Smellbound and EatPoetry. First, I explained the connection between smell and memory and had the audience remove the Smellbound postcard which contained a printed smell. I showed them the book I made, An Olfactory Memoir of Three Cities. Afterwards, I read them After Apple-Picking by Robert Frost while they ate the apple lollipop inside their kits. 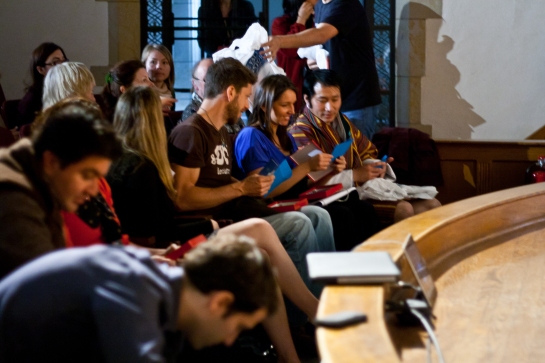 Fourth Talk: Happiness and the Senses

For my fourth talk at the end of the conference, I summarized how we can use our senses to be happy. The key points were that we are all equipped with these tools; i.e. we all had the capacity to hug our loved ones, to interpret a cloud, to smell a memory, and to connect poetry with food, and that if we paid more attention to the world around us, it would promote our feelings of well-being and optimism. I also explained my own explorations with happiness by showing submissions from DrawHappy, as well as what I’ve learned from the project so far.

What Worked, and What I Would Do Differently Next Time

All the sleepless nights making sure all 200 kits had the right contents were definitely called for. So much craft and attention were given to every single detail—each postcard had to be sealed in an envelope so people can only view them as instructed, the envelopes had to match the main color of each project’s logo for easy recall, each postcard had to be branded and oriented in a specific direction, each kit had to contain envelopes in a particular order and needed both a Sharpie and a lollipop. Anything less would have taken away from the experience or would have confused people. Doing something onstage so that people can mirror my actions was also important, and getting all the props together also was something I had to keep in mind in addition to the actual slides.

I’ve also been onstage on different occasions and it was interesting to feel these variegations of audience contact. When performing for the Poetry Brothel in Barcelona, I had to inhabit a certain character and, depending on the piece we were doing, had to maintain a certain mystique. When doing poetry readings just as myself, there was a bit of conversation with the audience when I talk about the process of writing, but during the reading of the actual poem, it was just myself and the text. I felt this while reading the Frost poem to the TEDx crowd—the entire hall was dead silent in contrast to all the other times I was up there. (That was quite fun, actually.) But doing a talk that involved not just a Keynote presentation but an actual creative activity was another world altogether—it’s difficult to assess if everyone was enjoying the activity, although what was great about having a particularly open audience such as this one was that they weren’t afraid of trying new things.

For the next time I do something of this nature, I would have a card that had explicit instructions not to use the objects inside the kit unless asked. Although I anticipated this by making sure the envelopes were sealed, I did catch at least one person eating their candy before lunch. (We were running a bit late, and I suppose he was hungry.) One thing about having a sealed and long candy stick was that it affords a long eating session; they wouldn’t have finished it to begin with and they could just put the candy back in the plastic and in the kit. Hard candy was definitely the way to go.

Also, I would have split the third talk (Smellbound and EatPoetry) into two and let each project have its own 10 minutes. Thus, I would have placed EatPoetry for the fourth talk and followed it with a short summary of the senses. When I went up for the last talk and said that “Ok, I’m not going to make you do anything now,” I could swear I felt the disappointment of some people. If the schedule allowed it, giving each project its own time in the spotlight would have allowed the audience to absorb the concept more fully, instead of rushing to the next project right away. I can’t wait until I develop these projects more and more, and see what I will ask people to do the next time.

I have to say, I love this format of getting the audience to actually do something creative in a talk, instead of me just standing there telling them about myself. Thanks again to the audience for being open to these ideas, my friends and colleagues for helping me pull this off, and to the wonderful team at TEDxNewHaven who worked tireless to make it all happen!

Thanks to Kate Russell and Liz Danzico, my plus two!

Last Saturday, I gave four talks at TEDxNewHaven: The Art and Science of Happiness, where I engaged the audience in my different interactive projects. The first goal was to get them to play throughout the day and the higher goal was to show them how paying more attention to the world promotes happiness. With the help of friends, I designed and produced 200 sense kits that contained objects that they interacted with at my instructions at different points of the conference.

The kit came in the form of a red box that matched the TEDx logo. 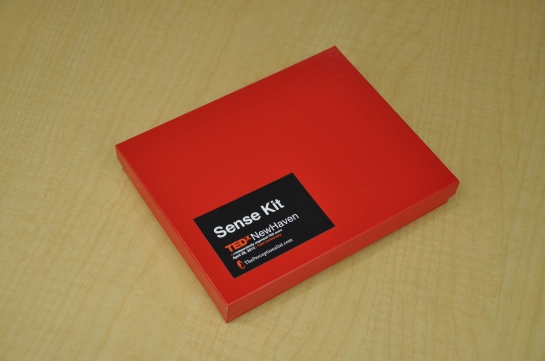 Each kit contained sealed envelopes with postcards containing postcards representing each project — HugPrints (a set of hugging instructions), Rorsketch (a cloud that can be drawn on), Smellbound (a piece of printed smell), and EatPoetry (text from Robert Frost’s After Apple-Picking), together with a mini-Sharpie (for Rorsketch) and a sealed kosher apple-flavored lollipop (for EatPoetry).

HugPrints cards, front and back:

Rorsketch cards, front and back: 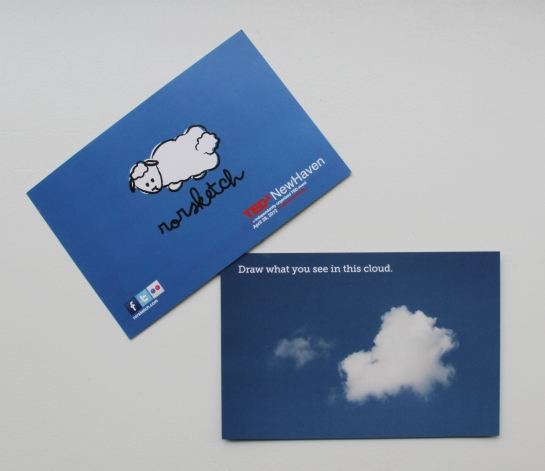 Smellbound cards, front and back: 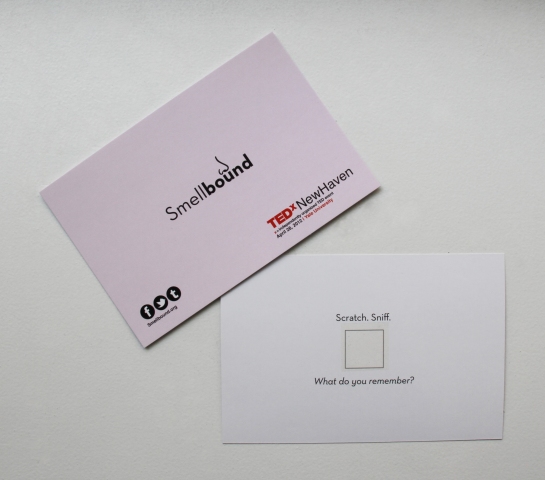 EatPoetry cards, front and back:

Here are all 200 of the kits (Two hundred! Madre mia. The TEDxNewHaven team were nice enough to have picked them up from the studio instead of me lugging all 200 to Connecticut.)

I would never have pulled this off without the help of these amazing people:

More about the actual conference and experience design in the next post.

I have been invited as a speaker at the inaugural TEDxNewHaven conference at Yale University. The theme of the conference is “The Art and Science of Happiness”, and it will take place on April 28th from 10am to 6pm. I will give four talks / exercises of most of my thesis projects as well as some other projects I’ve made in my two years here at SVA, along with 12 other speakers who will explore the theme of happiness through the lens of their respective research and work. Topics will be drawn from a diverse set of disciplines, ranging from positive psychology, entrepreneurship, education, politics, media, culture, technology, and art.

This conference is designed to inspire people and make them happy. Its primary goal is to foster connections among the diverse audience which will consist of Yale students and professors, New Haven residents, and a global online audience. To that end, the primary aim of the conference is to spark a deep conversation about individual as well as the community’s collective well-being. It is the first time that a TED event specifically presents the theme of happiness, so this conference promises to be very interesting!

I hope you will be able to join me! It will take place in the Sudler Hall auditorium, in William L. Harkness Hall (WLH) on 100 College Street, on the Yale University campus in New Haven, CT. You can apply for a ticket here.

Currently, I am neck deep in my thesis and making 200 sense kits for the TEDxNewHaven audience. This week, I’m defending my thesis on Friday, then catching the train to New Haven to get some sleep in a hotel then wake up to do my talks and learn more about a subject I hope to be fascinated with for the rest of my life. Did you catch all that caffeine in that run-on sentence? I’m excited for it all; I hope you do come!

Hello! This is the website of Catherine Sarah Young (楊 佳 仁). I'm an artist-scientist-designer-writer-explorer working on human perception and the environment. I imagine, write, and make things. Check this site for project updates, and the menu for current and past work. Thanks for stopping by!

The pianist, the awesome Alexandra Dariescu, is Romanian-born and I love how she inserted this Romanian piece in between, which was the most badass part of the night. 😍 Also, I'm starting to run into the same people in the audience which makes me think I've been here long enough. 😂
Flying bear! I love the random things in my neighborhood. 🐻❤
Art influences policy. Bravo! 👏👏👏
Woke up at the ungodly hour of 5 AM for Pilates since today has no breaks. Half-napping, half-wheezing on the machine, I watched four pigeons stare at me, either judging or cheering one does not know. I also think the same four followed me home. 😂😍 But wow look at that early morning Paddington light! I should keep non-artist hours more often.❤
Rest in power, Katherine Johnson (1918-2020) ❤ Image via NASA