Barcelona-based poets Harriet Sandilands and Alena Widows (known here as poetry technicians Bert and Frank), bring you The Poetry Machine, a project that allows you to create spontaneous poetry through random prompts. It started as an analog project during Nadivada, a Christmas Dada event in Barcelona , and now, the digital version is brought to you by designer Sebastian Vidal.

Visit the site at http://www.thepoetrymachine.net

The interactive website launched this Valentine’s Day and asks you to type in your answers to creative questions. 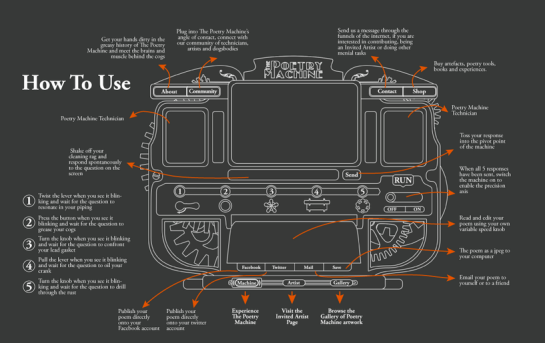 I tried it today, and this is what I came up with:

How to use The Poetry Machine

Hurray for poetry! Check out the project here.

I remember the first time I thought a poetry reading could be something more. The road to that discovery began in Gaudí ‘s Casa Mila (aka La Pedrera) up on Gracia in Barcelona, where I offered to take the photo of a Greek tourist who was similarly alone and waiting in line. We talked, roamed the labyrinthine sculptures on the rooftop, and we ended up hanging out for the rest of the day. When she told me she was going to something called a poetry brothel, I was first dumbfounded, then decided. I must know what this is all about.

I remember the first time I attended the poetry brothel, which fittingly took place in a bar called 7 Sins. It was just a like a brothel on the outside, yet instead of having to choose among prostitutes to have sex with, you choose a poet who will read poetry to you. I was drawn to one who was named Claudio, who was blind and read tarot cards. After reading my fortune and giving me a private poetry reading, he let me choose among folded pieces of paper with some writing. My chosen note was a fragment from one of William Blake’s poem: “See the world in a grain of sand and infinity in an hour.” He also asked me to leave a note in the pile for the next guest to rummage from. Later than night, I left in a daze, saying thanks to the brothel’s Madame Eva and wondering whether the past few hours were real.

I remember the first time I became a part of the poetry brothel.  Yeray, who played the role of Claudio and who had perfect vision, was now someone I performed with. I became good friends with them, including Carolina, who was Ana Isabella in real life and who it turns out wrote the quote by William Blake in the note I randomly chose. Most of their characters were runaways or misfits from different periods, and the poetry brothel became a pulsating living organism where time obeyed no laws. My character was named Cài Ren, a derivative of my Chinese name, partly due to self-identification and partly due to lack of imagination. Cài Ren was a princess from ancient China who ran away from her kingdom and was adopted by kung fu monks. She spent her days training in martial arts and doing calligraphy and science experiments. Again, a symptom of both self-identification and lack of imagination. 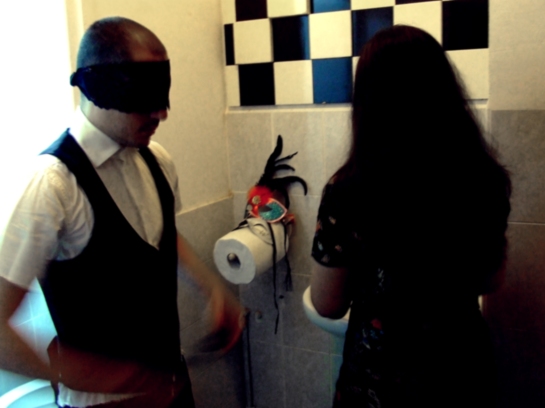 I remember the time when this ritual of adopting another identity and shedding it the next day became normal. It was the most hands-on education in immersive theater I have ever had. I lived poetry, whether writing it in Chinese calligraphy, reading it in English or Spanish, or scribbling it on rose petals to give to strangers. Poetry became a  sensual experience, going beyond words and finally into what the words actually represented. To read it out loud went beyond the anxiety of not stumbling over your verses and looking like a fool in front of your audience. It became a moment of anticipation, of instant feedback, of actual conversation. Finally, the audience could ask questions, and I remember intelligent conversations that involved history, psychology, art, and science. That removal of the stage enabled both the audience and the poet to put actual human faces on each other.

Being made up by Violet, photo by Joe Wray

I remember the occasional confusion I’ve had when addressing my fellow poets. It’s easy to get identities mixed up, calling each other by our brothel names instead of our real names. I remember when I being part of the poetry brothel slowly opened me up, allowing me to embrace the darker parts of myself. I remember the first time I realized that these poetry whores slowly became my family in Spain. And that now, almost two years later, I look back and think it was one of the most influential phases a writer/artist can have in her life.

Oh yes, I remember it all. And I miss it all.

If life ever takes you to Barcelona, allow yourselves to be seduced by the Prostibulo Poetico. Even the Guardian thinks it worthy of a visit.

I realize that through many years of living elsewhere, I’ve noticed things…more. As the years passed, my mind automatically latches on to what at first seems inconsequential, but eventually holds something of reflective importance.

Poetry is the bastard child of wanderlust. When one has many versions of what is “familiar,” one can generate a different perspective of the most mundane of things. Two weeks ago, I glanced up on my way out of my apartment, and noticed a bunch of balloons trapped among the branches of a tree. This isn’t the first halted balloon flight I’ve seen, yet by the nth time I see it, I now view them as a symbol of a dream whose flight got killed in midair—a tragedy, a loss. I begin to imagine the story behind it: the child to whom these balloons probably belonged, if he was sobbing, if he had his mother to cry to, if this was a significant character-building experience. I begin to imagine the story after it: what if pigeons untangled the balloons and let them fly, what if someone shoots at them with arrows, what if birds turn them into a nest, what if they get untangled eventually yet fall limp to the ground and someone refills them with helium so they can fly again. And so on and so forth.

Same way out the door on a different morning, and I see a flock of pigeons grouped together, lying in wait in a line. I recall Pablo Neruda’s poem, Bird, which begins:

“It was passed from one bird to another,
the whole gift of the day.”

I notice a lot of humor, too, in the sometimes punishing streets of New York City. Ironically, or perhaps intentionally, a beauty salon was just around the corner. The chalk marks read, “The cruel hand of fate could use a manicure. —Elbowtoe.” 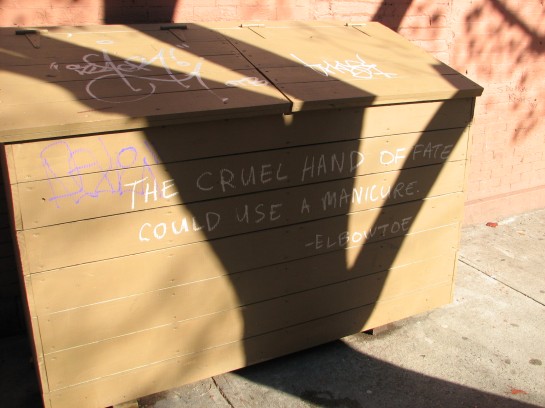 Walking home from taekwondo one night, a friend pointed out a birdhouse hanging from a tree branch. A few days later, I came back on an afternoon and took a photograph:

I took another photo, this time showing it across the Hotel Chelsea. Because of its controversial history, I’ve always associated it with death and the macabre, and so having a brightly painted birdhouse, which recalls life and hope among other things, seems an evocative contrast to see, here in the city of many contradictions.