My favorite part of Gyeongbukgung, the main palace of the Joseon dynasty of Korea, is a lovely pavilion named Hyangwonjeong and its surrounding pond. 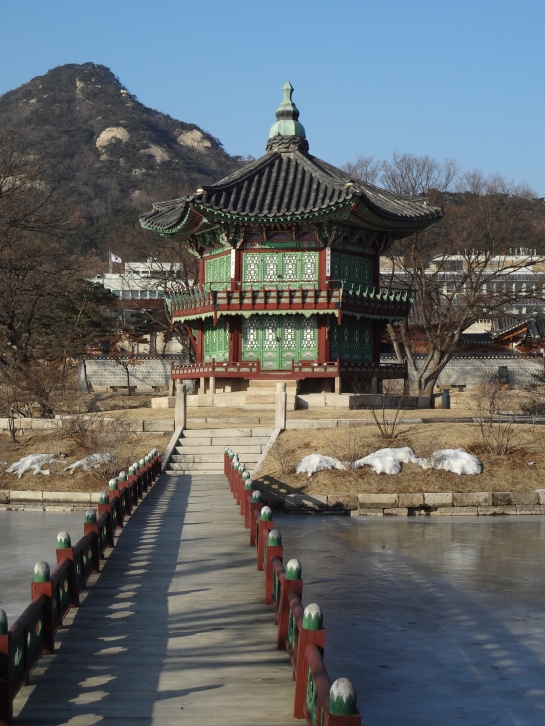 It is usually more known for the ghastly assassination of Queen Myeongseong by the Japanese government. But in Choi Joon-sik’s book, Soul in Seoul (2005), I came across another interesting (and less gruesome) fact: This pond is the place where an electric light was turned on for the first time in Korea in March 1887. Mr. Choi writes:

“The Joseon government sent off an official letter to the American bulb inventor Thomas Edison in 1883, asking him to set up the lighting system within the palace. Four years later in 1887, the first light bulb was switched on at this pond, which was two years before the Forbidden City in China was brightened with electricity. One of the reasons why light bulbs were installed here so early is because King Gojong, with his kingdom on the verge of collapse, was very afraid of potential threats from his rivals. He was particularly scared of nights, so he seemed to have wanted his residence to be brightened up with lights at night. The reason why the power generator was set up around the pond was because it needed water to produce electricity. There are many other interesting stories involving the nation’s first power generation: for example, it is said that people couldn’t sleep because of loud noise coming from the generator or that the fish living in the pond went belly up due to hot water flowing from the generator.”

"Hello, your highness." 👋
Just Benny today, and 3 seconds into the video, our King faintly regards my presence. ❤ #BennyTheSeal
They are so cute and zen and are multiplying! ❤
Benny is back and now there are two! ❤
Day 3 and still no Benny the Seal (I think I got lucky last Sunday!) but his avian, reptilian, and lepidopteran kin were out hunting today. I ran/walked almost a 9k to do a macaron detour for all the PhD writing ahead of this soggy week. 😍 #8KtoDissertation #8ktoDday #HarawayJoke
Day 2 of doing a Murakami-esque hack and run/walking an 8K as I power through the last 1.5 PhD chapters. Benny the Seal wasn't in his seat, but still lots of wildlife. I love how the Sydney Opera House casts a shadow in the water. 😍 I learned that that flower is a foxglove, and that statue is Czech. #8KtoDissertation #8ktoDday